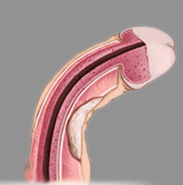 Penile Curvature Correction is the surgical repair of penile curvature which is caused by Peyronie's disease or congenital curvature.

When is it done?

The surgery is performed in patients when the penis curvature prevents sexual intercourse. A prerequisite is to stabilize flexion for 3 months before surgery and eliminate pain at the point of bending. In addition, the patient must have completed one year since the diagnosis.

What preparation is required?

Upon hospital admission, preoperative preparation includes blood tests, chest X-ray and ECG (electrocardiogram). In case you are on anticoagulant therapy, it may be required to interrupt your anticoagulant therapy a few days before the operation. You should always consult your Cardiologist, for there may be need to replace anticoagulants with injections in the abdominal region.

What happens during the procedure?

The surgery requires general or spinal anesthesia. Initially, the patient is placed in the supine position and the area is sterilized. An incision is performed in the perimeter, beneath the glans (penile head), the penis is stripped from the skin and the curvature is corrected. In the majority of the patients the surgery is completed by circumcision. At the end of the procedure, tight bandaging is placed around the body of the penis, which bandaging is removed the following day. The average hospital stay is 2 days.

It is often required to place a catheter, which is usually removed the day after surgery.

In some cases, a graft obtained from an area of the patient's body is used in order to repair the damage. More specifically, grafts may be taken from the skin dermis, oral mucosa, tunica fibrosa, tunica vaginalis, but may also be vascular grafts. Grafting increases the risk of erectile dysfunction after surgery.

What about after the procedure?

The first 24 hours you may feel pain in the area of surgery, which is controlled by analgesics.

Upon discharge from hospital, you will also receive written instructions about:

For two weeks, you will need to abstain from any kind of physical exercise and strain, as well as evoked erections. Sometimes drugs are administered to prevent frequent erections.

You should consult your cardiologist about when it is safe to restart the anticoagulation treatment.

What are the effects on patient's quality of life?

The majority of patients do not face any problem after surgery. You should be aware of the high probability for circumcision during surgery. Also, it is likely to present penile oedema that occurs with skin swelling and bruising which subside after about 10 days. More than 1/10 of the patients report that they can palpate the stitches along the body of the penis.

In penile curvature surgical procedures without graft, the correction is achieved by a shortening of 1-1.5 cm of penile length, which is perceived by more than 1/10 of patients as something more dramatic than it actually is.

In rare cases, some patients present incomplete correction of the curvature or postoperative recurrence and other erectile dysfunctions.