Premature Ejaculation: It is nice to… ‘have the control’! 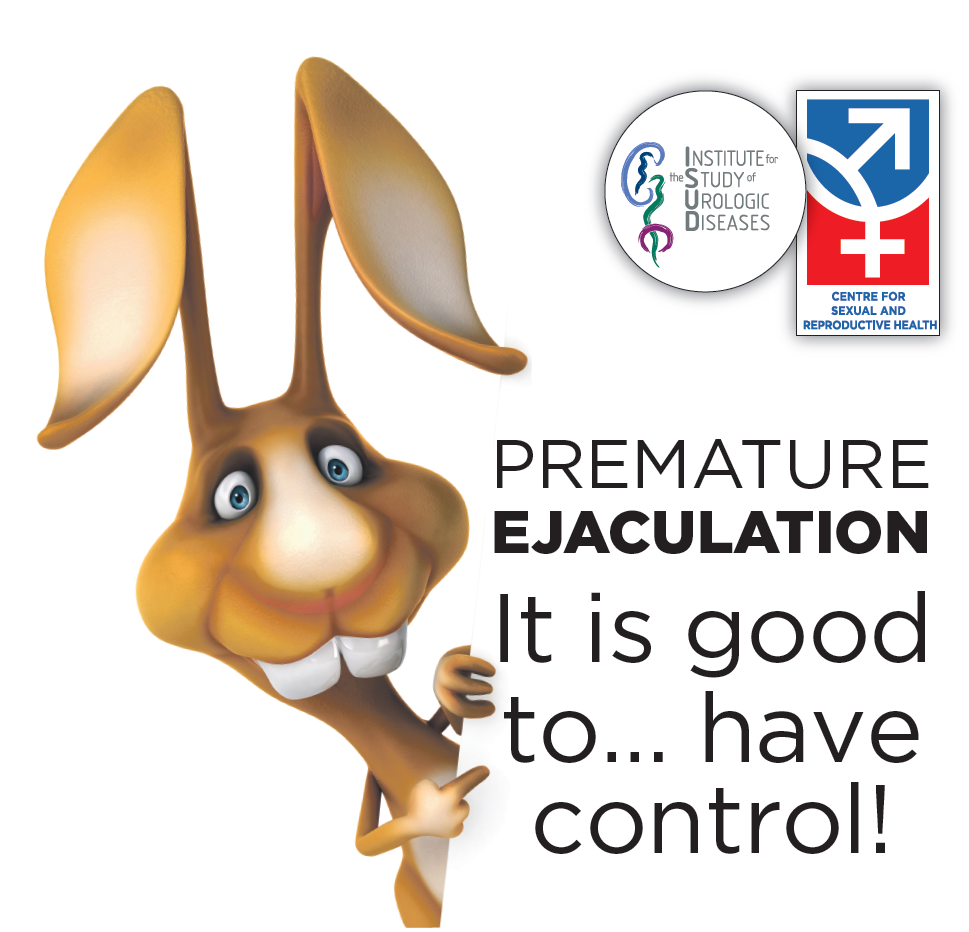 How is ejaculation induced? 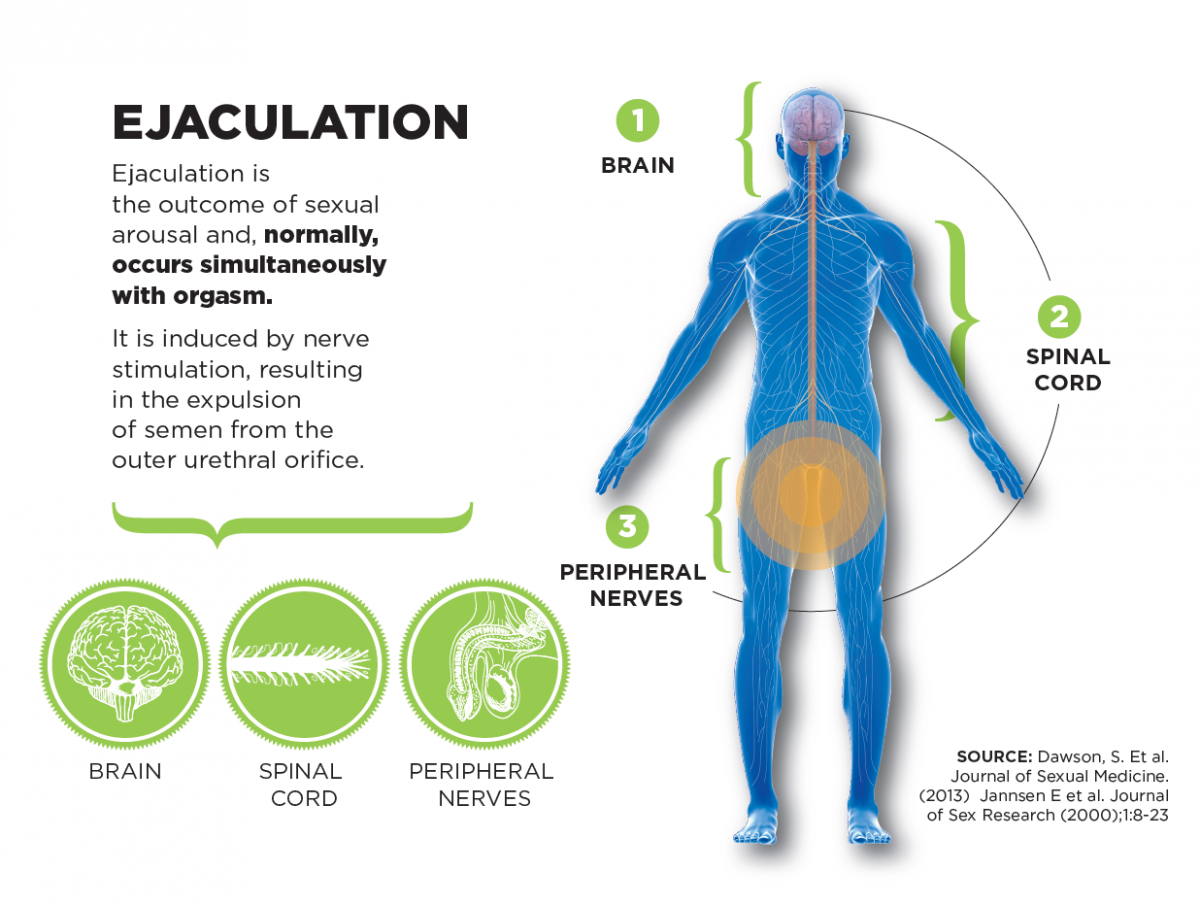 Ejaculation is the outcome of sexual arousal and, in most men, it occurs simultaneously with orgasm, i.e. about 4-10 minutes after arousal and erection. Ejaculation is controlled mainly by the central nervous system (CNS). According to the latest scientific data, ejaculation is primarily a neurobiological -rather than a psychological- phaenomenon.

The ejaculation process is regulated centrally by the brain and spinal cord through a large number of neurotransmitters, such as serotonin (5-HT), dopamine, oxytokin and others. A great many data advocate that serotonin, and specifically 5-HT receptors, are mainly responsible for activating the process of ejaculation. As cerebral and spinal centers get stimulated, they induce peristaltic movements (repeated rhythmic contractions) of the bulbocavernosus (BC) and ischiocavernosus (IC) muscles of the pelvic floor, resulting in the expulsion of semen from the outer urethral orifice.

What happens in Premature Ejaculation (PE)? 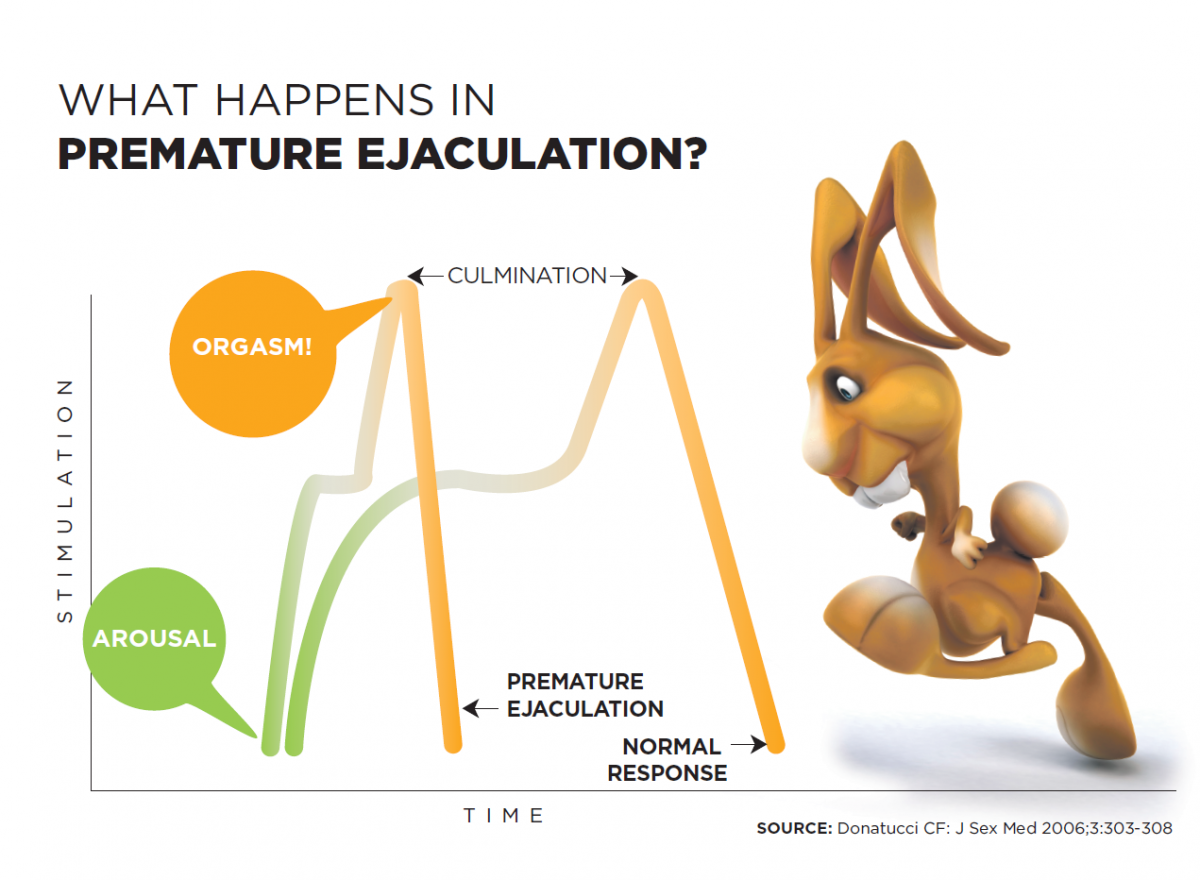 Premature ejaculation occurs due to the rapid evolution of the two first stages of the sexual response cycle and is not necessarily related to strong sexual arousal or changes in erection. Premature Ejaculation seems to be a neurobiological problem that is related to low serotonin levels in those regions of the central nervous system that regulate ejaculation (brain and spinal cord).

What are the features of PE? 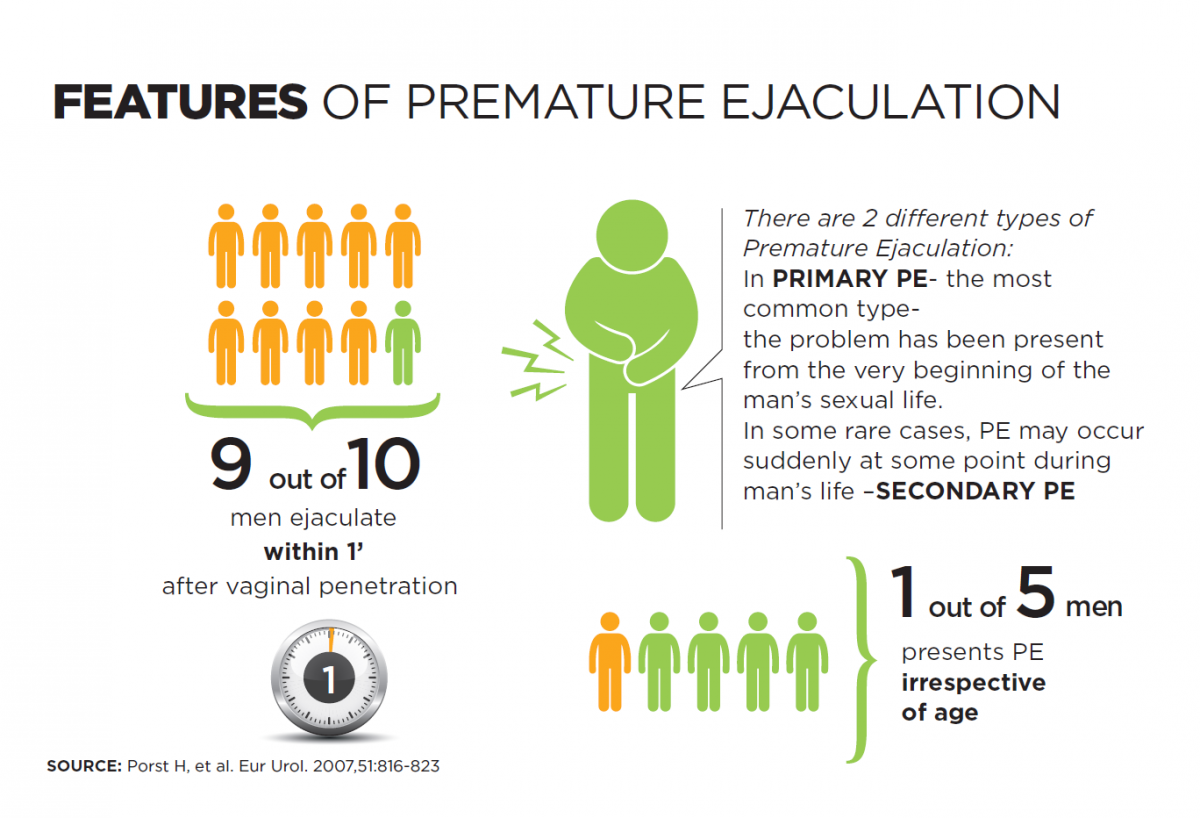 Premature Ejaculation is the most common sexual dysfunction in men below 60 years old. More specifically, it occurs in 1 out of 5 men. It is equally frequent at all ages below 60. In men with PE, the sexual act is usually completed within 1-2 minutes after penetration, for ejaculation occurs too fast and without any control. In fact, the phase of sexual arousal is too short, characterised by normal and fast achievement of erection but rapid ejaculation and orgasm, without allowing the man to enjoy sexual intercourse.

According to the International Society of Sexual Medicine (ISSM), PE is defined as follows:

IELT has been determined to 1 min because, according to large epidemiological studies, 90% of men with PE reported that they reach ejaculation within 1 min from penetration, while the rest 10% within 2-3 min. Short intercourse duration (short IELT) is a parameter that reflects the man’s inability to control ejaculation but does not fully and clearly reflect the man’s sexual satisfaction or disappointment due to the problem. That is why the term ‘control over ejaculation’ has been added to the PE definition, as it reflects more clearly the extent of negative personal feelings and consequences resulting from PE, such as low level of sexual satisfaction and personal anxiety.

How many types of PE are there?

There are 2 types of Premature Ejaculation (the first one being the most common): 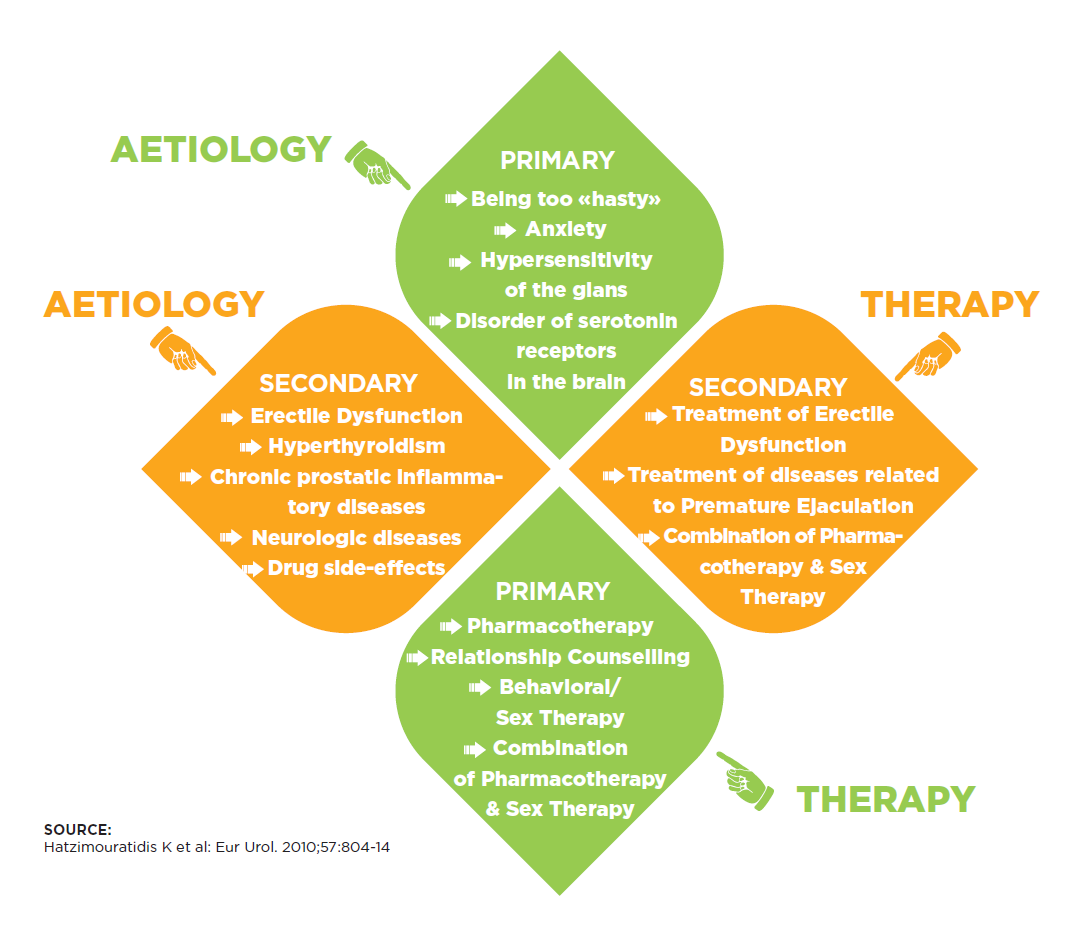 Secondary PE is caused by psychological and physical aetiological factors. The primary physical causes of Acquired PE are the following:

The primary psychological causes of Acquired PE are the following:

Difficulties in the relationship of the couple/ Negative sexual experiences

Thyroid disorders, and mainly hyperthyroidism, are the only known today organic disorders manifesting PE as a symptom. In these cases, the problem is immediately restored as long as the thyroidopathy is resolved.

Medical conditions that may occasionally cause PE secondarily are prostatic inflammations (chronic prostatitis), as well as erectile dysfunction. These should be initially treated and, only if the PE problem persists, is  PE treatment followed.

Can a man with PE be helped?

Even though PE is very common, men with PE are among the most difficult-to-diagnose and to-treat populations. Indeed, PE still remains a disorder that is hard to diagnose and treat, mainly because the majority of men are not willing to discuss their symptoms with physicians -either because they are embarrassed or because they believe that their problem cannot possibly be treated and they are not aware that there are PE therapies available. Studies have shown that only 9% of the men who have identified PE symptoms on their own, have visited the physician. And out of this small number, 70% of cases were diagnosed by chance when visiting the physician for another medical problem. It is remarkable that out of 91% of men who did not consult a physician, 2,2% reported that they had never even thought about doing so.

What are the consequences of PE?

According to scientific studies, men with PE experience: 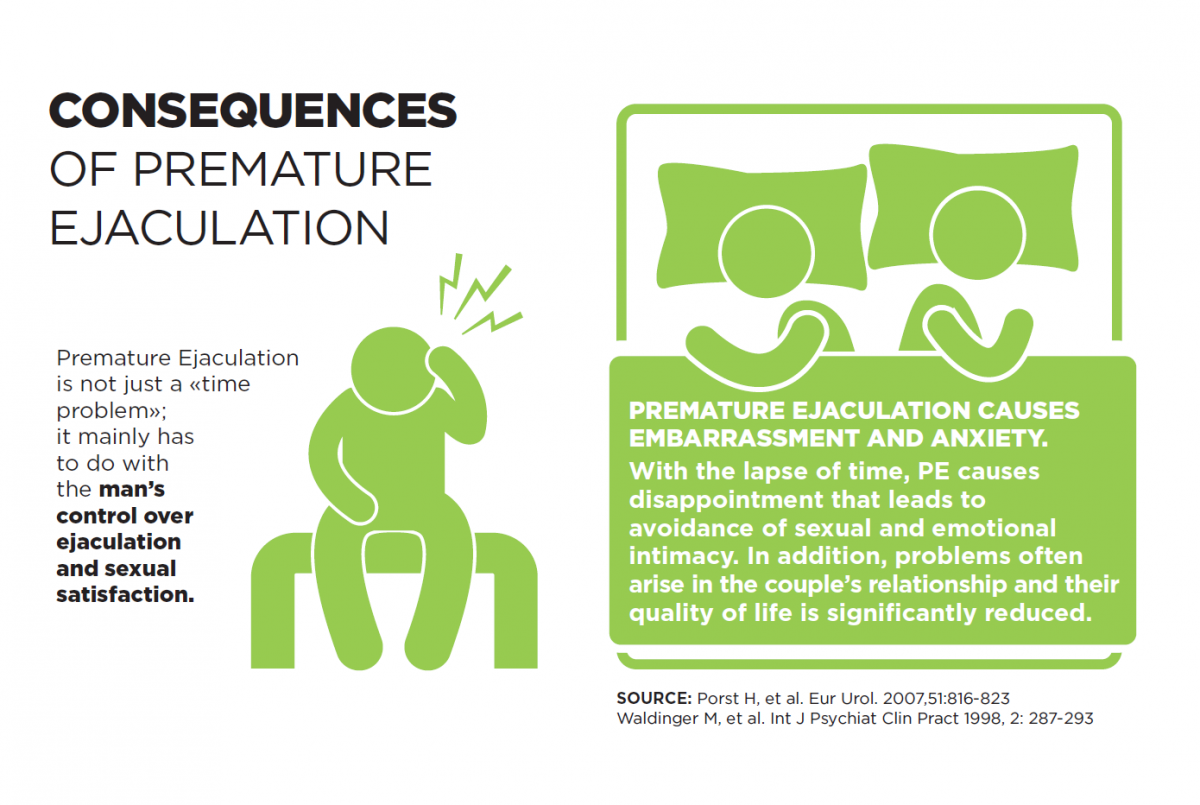 The problem may seriously affect the man’s self-esteem, resulting in anxiety, embarrassment, disappointment and sometimes even depression.

Also significant is the impact on the man's female partner:

What is the diagnostic approach in PE? 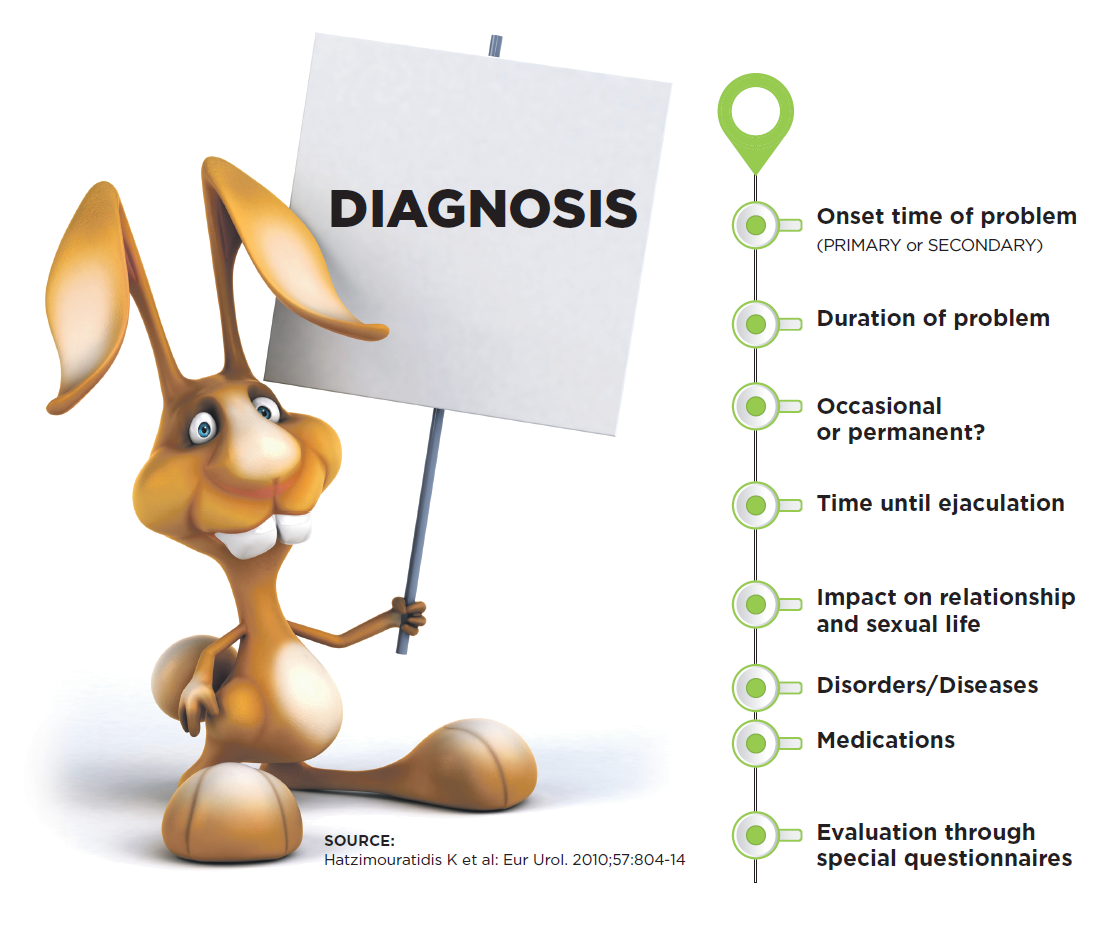 The Expert (Andrologist or Sexologist) is familiar with discussing openly sexual issues and will make you feel at ease. A classical proposal to open the discussion and ‘break the ice’ is: “Doctor, I have a sexual problem and I would like you to tell me whether I can discuss it with you”. Given that the Expert is specialized in Sexual Medicine, he will immediately respond by encouraging you and taking your sexual history. The proper sexual history includes personal questions, which are essential for the diagnosis:

Then a full medical history will be taken, in order to record any disease/disorder you have had or any medications you have been receiving. A clinical examination follows, including digital rectal examination (DRE) as part of prostate screening. Lastly, the physician may recommend a lab screening test including all hormonal thyroid tests and, if there is suspicion for prostatic infection, semen culture.

Through the entire process, the physician may ask you to fill in a special questionnaire about PE that will allow for a more objective evaluation of the problem and further assessment of PE therapy.

What therapeutic options are there available?

For decades in the past, PE was considered to be a purely psychological problem and was treated following mainly behavioral approaches. Later on, some pharmacotherapies  became available and it is recently that their prescription has been officially approved. The problem very often occurs due to organic/ neurobiological causes which are curable. So, if the origin of PE is some other disorder/disease (e.g. hyperthyroidism, undiagnosed chronic prostatitis), then the treatment of the primary disease will restore the problem.

In case of Primary PE, physicians today are in the position to provide various therapeutic options to their patients, such as pharmacotherapy and psychosexual treatments.

Self-help techniques, such as using double condom or delay condom (containing anaesthetic substance that creates a sensation of numbness) may be partially effective for a short period of time, but they are likely to ultimately exacerbate -rather than treat- the problem, since they reduce the sexual senses that have to be set under control in order to resolve PE.

Lastly, it should be underlined that preparations purchased online from the Internet are practically of unknown origin and composition and, therefore, of uncertain safety.

Is there pharmacotherapy available? 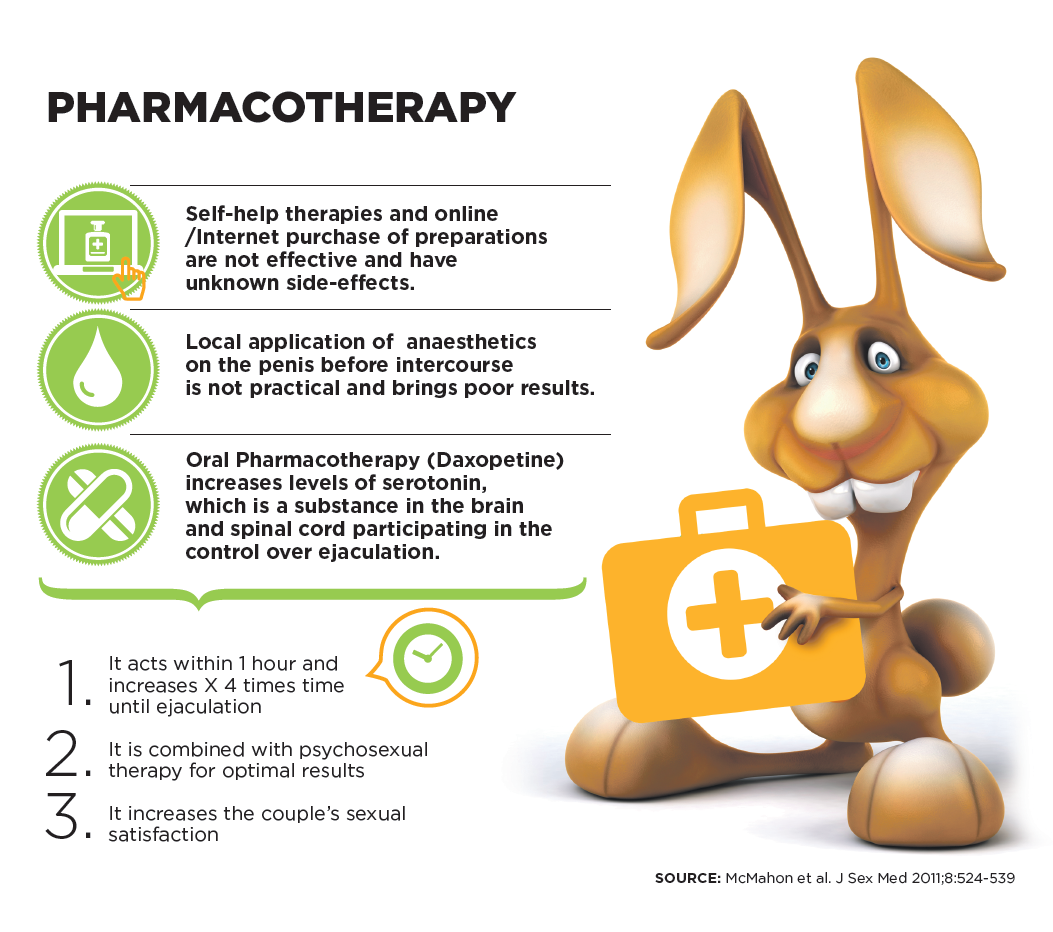 There are various oral preparations (per os) that need medical prescription and have been used with success.

Topical anaesthetics in the form of creams and sprays (e.g. lidocaine and prilocaine) are applied locally on the penile region (mainly on the glans) to desinsitivize the glans and delay ejaculation. However, the results are moderate with regard to ejaculation delay. In addition, it is difficult to achieve the right dosage of these topical anaesthetic preparations. Thus, excessive amount of the preparation may cause penile numbness and lead to loss or erection and/or inability to ejaculate. Also, there is the risk of the anaesthetic ingredient entering the partner’s vagina causing reduced sensation and even difficulty to achieve female orgasm. That is why the man using such preparations should always wash his penis thoroughly before sexual intercourse.

The only effective pharmacotherapy for PE is the oral administration of Selective Serotonin Reuptake Inhibitors (SSRIs), which act on the cerebral and spinal centers and delay ejaculation. The problem with these drugs is their slow action and lack of indication for the disease. However, during the last years in Europe there has been a preparation specially developed and specifically indicated for PE, Dapoxetine. This medication acts within one hour and thus can be used before sexual intercourse (on-demand). According to studies, Dapoxetine increases IELT (Intravaginal Ejaculatory Latency Time) by 3-4 times, improves the man’s control over ejaculation and increases sexual satisfaction both for him and his partner.  For even better and more permanent results, Dapoxetine can also be combined with various psychosexual therapies. As with every medication, Dapoxetine should always be prescribed by your physician, who will inform you thoroughly about its use and potential side-effects.

There are specific therapies and sexual exercises recommended by the Sexologist, with the aim of educating men how to recognize ‘signs’ signaling the ‘coming’ ejaculation and how to improve control over ejaculation.

The 2 most commonly used behavioral techniques are:

Although there are various modifications of these techniques, the clinical experience has demonstrated that after their initial 50-60% success rate, they are not effective in the long run and lead to PE relapse.

Instead of the ‘stop-start’ technique, which may also be minimally satisfactory for the partner, men today learn how to mitigate and reduce the level of sexual arousal by performing slow, sensual movements, while taking deep and slow breaths. The aim is to keep the level of sexual arousal below the ejaculation threshold, while maintaining at the same time a satisfactory erection. Within the context of this effort, the Sexologist may propose a series of special desensitivization exercises to be performed at home with the use of special devices that induce targeted penile stimulation – either while masturbating or while carrying out sexual exercises that involve both the man with PE and his partner. Lastly, Breath-Control techniques seem to offer relaxation and bring results.

Which are the therapeutic targets? 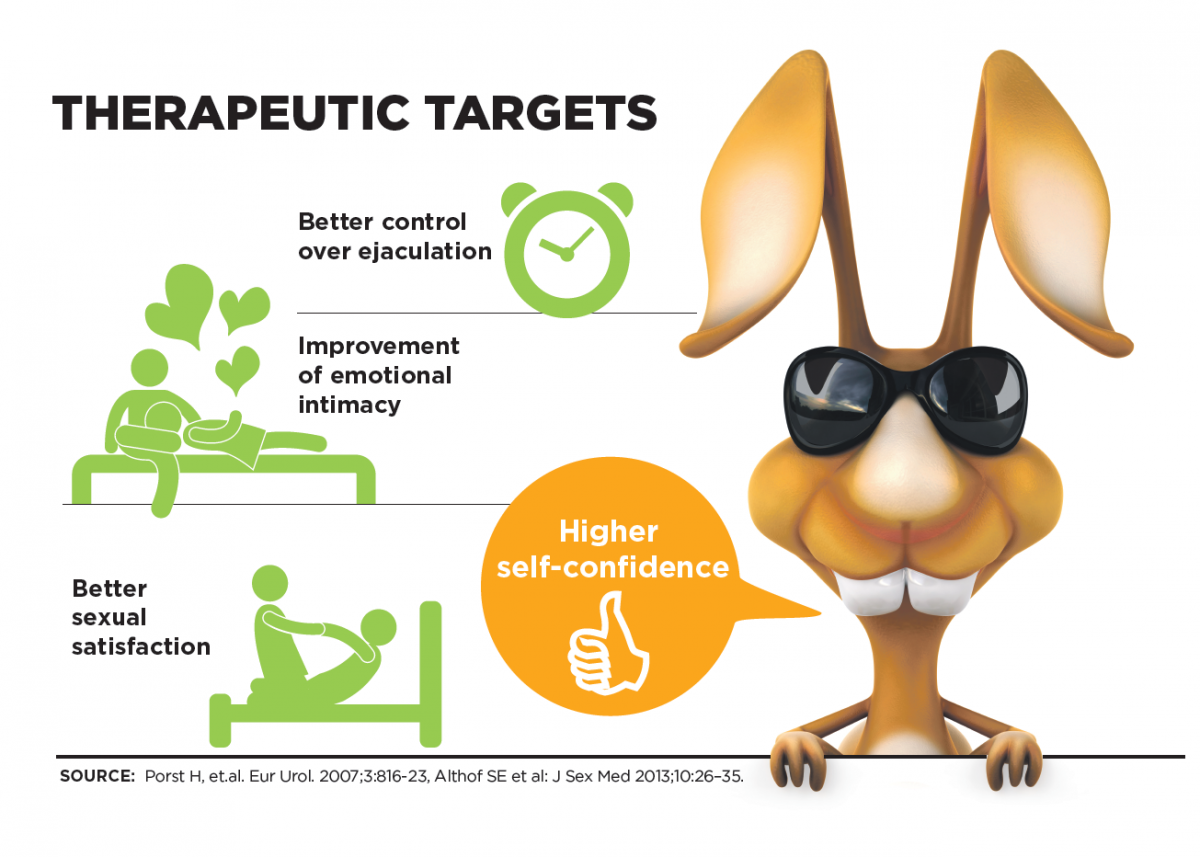 Therapeutic targets in PE should not focus mechanistically only on increasing the time until ejaculation, for it is certain that such an approach is going to result in PE relapse. A holistic approach to the problem aims at helping the man gain or retrieve control over his ejaculation; and this is the only possible way to improve emotional intimacy and increase both partners' sexual satisfaction.

Have a fast self-evaluation test about PE click here