What is the Prostate Gland?

The prostate is a small gland (10-20 gr), the size, shape and color of a chestnut. Located below the bladder and surrounding the urethra, the prostate produces a fluid (semen) that is stored within the gland and ejected towards the urethra during ejaculation. So, the prostate plays an essential role exclusively in ejaculation and reproduction. However, prostatic diseases are common and may cause severe sexual problems.

More specifically, 1 out of 2 men will present prostatitis, 1 out of 6 prostate cancer and 1 out of 3 benign prostate hyperplasia. 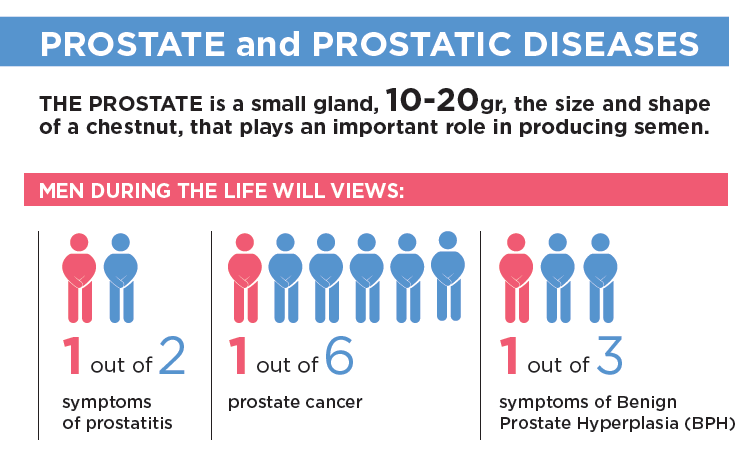 Which are the prostatic diseases?

The main prostatic diseases are three:

Prostate Cancer: the most common male cancer (afflicting 1 out of 6 men) and the second most common cause of male cancer death (after lung cancer). There are no symptoms at all in the initial stages when the disease is still curable. Therefore, diagnosis can be set only with the annual check-up.

Symptoms of prostatitis include difficulty to urinate, pain in the genital area and pelvic floor, painful ejaculation, premature ejaculation, erectile dysfunction and low sexual desire. Once the inflammation is treated, sexual problems are resolved. However, in the meantime until remission of inflammation, there are erectile drugs called Phosphodiesterase type 5 (PDE-5) inhibitors (vardenafil, sildenafil, tadalafil) that can be used to restore quality of erection and increase perfusion of the prostate gland which is essential to treat the inflammation. In very rare cases only, erectile dysfunction may remain even though symptoms have subsided. If so,, the problem is purely psychogenic and it is highly recommended to visit a Sexologist. 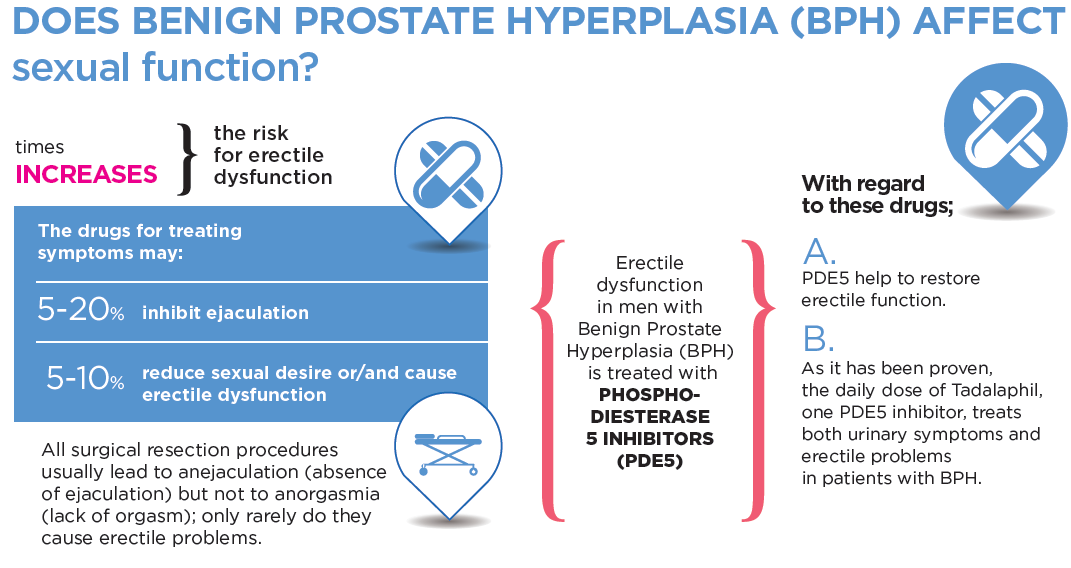 Benign prostatic hyperplasia (BPH) increases by 7 times the risk of erectile dysfunction (ED) and severe urinary disorders. When BPH is treated successfully, erection is also improved. It is mainly Phosphodiesterase type 5 (PDE-5) inhibitors that contribute significantly to the treatment of both ED and urinary problems. There is one PDE-5 inhibitor, tadalafil, that has been officially approved in the 5mg dose for the treatment of both ED and BPH. 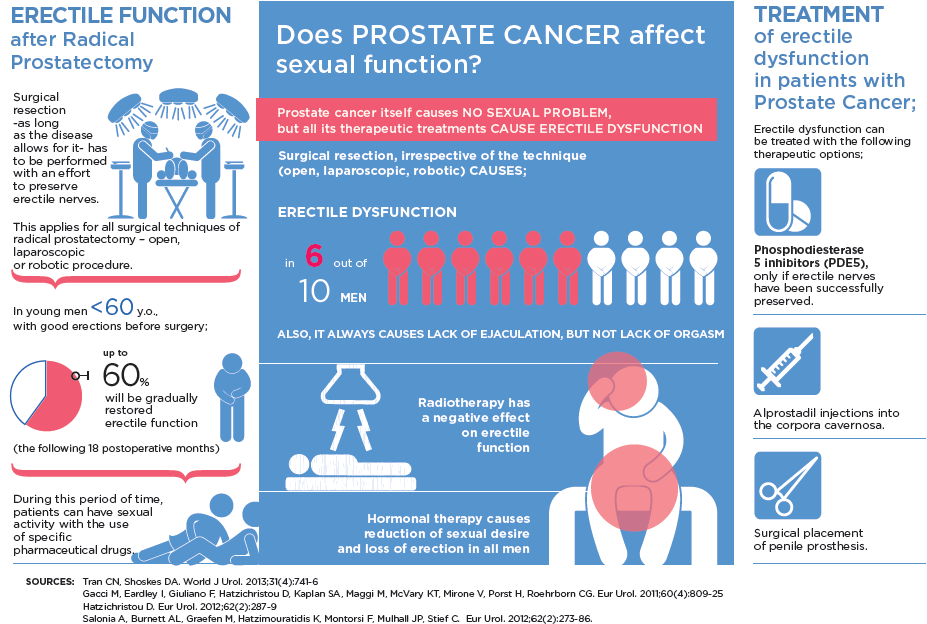 Prostate cancer practically does not affect erectile function (ED). However, all cancer treatments cause ED. Radical prostatectomy -no matter what method applied- causes ED in most men. The only possibility to have post-operative erections (usually with the help of erectile drugs) is when erectile nerves have been preserved. This is feasible to achieve with both open surgery and endoscopic procedures (laparoscopy, robotic surgery). With regard to erectile preservation, no superiority has been documented so far between laparoscopic and robotis surgery, as they both give similar results. As for radiation, this will also ultimately affect erectile function. Lastly, drugs for advanced prostate cancer (hormonal agents that “put” cancer “to sleep”) also cause full ED. The only solution may be their intermittent use (intermittent hormonal therapy) or intrapenile injections to cause erection. However, in men with good life expectancy, penile prosthesis offers an expensive but excellent solution.

Read infographic Prostate: is it an ally or an enemy in SEX? From the series SexInfographics of the Center for Sexual and Reproductive Health (CSRH)