Prostate cancer is the most common type of male cancer and the second cause of cancer-related death in males, after lung cancer. Timely diagnosis, however, is possible, provided that all men become aware that during its initial stages prostate cancer is treatable. Given that prostate cancer manifests no symptoms in early stages, the diagnosis can be set only through annual preventive screening.

How is the diagnosis set?

Prevention is based on simple blood  testing  that can help  identify prostate cancer in an early stage. This test measures the Prostate-Specific Antigen (PSA) in the blood. PSA is a prostate protein that normally appears in small quantities in the blood of men (picture 1).

At ages below 50, there is no need for that, because prostate cancer is rare in younger men. Only if a first degree relative (father, brother or parental siblings) has been diagnosed with cancer, a PSA test  is meaningful at the age of 40 to 50 . The test must be performed regardless the symptoms, because, as mentioned, cancer usually grows slowly without causing symptoms requiring medical attention.

Above the age of 50, however, about 2 out of 10 men (20%) have a high PSA value. High PSA levels may  be due to prostate cancer but may also be related to benign prostatic hypeplasia or even urinary tract infection or prostatic inflammation (prostatitis). Therefore, additional tests and mainly a digital examination of the prostate gland by the Urologist are necessary. Despite the advantages of timely cancer diagnosis, there are clear disadvantages in identifying PSA values: in some prostate cancer cases the PSA test  shows low values (in about 1% of cancers), whereas in other cases the high values will oblige physicians to submit their patients to biopsy, without though high likelihood of finding cancer.

What kind of results could the PSA test give?

It is to be noted that there are no specific PSA values to distinguish between normal and abnormal levels. Despite the fact that values below 4 ng/ml are considered to be normal, it must be underlined that these values are indicative and do not exclude cancer. For example, a man who had a PSA value of 1 in the previous year and has a value of 2 ng/ml this year has higher probability to have cancer than another man with values of 4 and 5ng/ml respectively. In the first case, there is an annual 100%  increase, while in the second case the probability is just 25%.  In any case, men with PSA values over 10 ng/ml are very likely to be diagnosed with cancer (5 out of  10) and biopsy is imposed, unless they have recently had a urinary tract infection or placed a bladder catheter.

The age, also, plays a determining role in patient evaluation. For example, an 80-year old patient with a PSA value of 2 or 3 ng/ml has practically zero chances of dying from prostate cancer and, therefore, a retest is probably aimless. But if a 50-year old man presents a PSA value increase from 1 to 3 ng/ml within a year, the tripling of that value raises strong suspicion for cancer, which, at those ages, is life-threatening. Hence, the PSA value is indicative and the assessment must be made by the Urologist.

The Urologist will submit you to a digital examination of the prostate gland through the anus. This examination may be annoying (mainly for men with hemorrhoids), but, usually, it is not painful and is very short in duration. 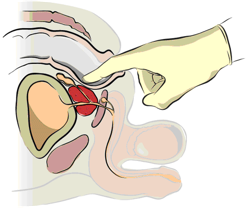 The digital examination is less efficient than the PSA blood test  in finding prostate cancer but, sometimes, it can detect cancer cases in men with normal PSA levels. In such a case, when there is a palpable induration in the prostate area, a biopsy is imposed regardless the PSA value, apart from the patients in bad general health condition due to other illnesses and a short life-expectancy. The digital examination also provides information about the size of the gland and  the presence of any potential inflammation. Once this test is performed, the Urologist will decide whether you should undergo prostate biopsy.

How is Prostate Biopsy performed?

Prostate biopsy is performed with the use of a special transrectal ultrasound probe, while visualizing  the gland on the monitor.

This method helps the Urologist draft the biopsy plan and to decide how many tissue blocks have to be obtained, according to the size of the gland (usually 6 to 24 segments). Then, the Urologist will use a fine, long needle which is driven through a special biopsy “gun” device in order to harvest small tissue quantities from various sites of the prostate. The experience is unpleasant but acceptable under local anesthesia. Eight men out of ten, in average, may have a normal biopsy result (negative for cancer).

Timely diagnosis of prostate cancer is actually possible with annual preventive screening. Thus, in most patients cancer is diagnosed when it is localized (i.e. before it metastasizes). 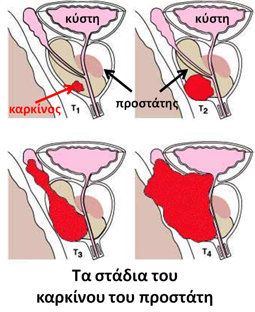 Treatment options for advanced prostate cancer are not many (hormonal therapy and later chemotherapy). Yet,  there are quite a few therapeutic options for  the early stages of the disease.  The most appropriate treatment is chosen always following an extensive discussion with the patient.

What are the treatment options for the early prostate cancer stages?

The most common forms of treatment for localized prostate cancer are the following:

Active monitoring means regular check-up (e.g. every 3 to 6 months), since prostate cancer is a slowly progressing disease. Monitoring is usually recommended  for patients of advanced age with a small lump  which  is not very invasive or to patients with a short life-expectancy because of other severe health issues. This choice is evaluated on the basis of the characteristic biopsy findings.

Today, radical prostatectomy may be performed as an open procedure (with an incision) or as an endoscopic intervention (i.e. laparoscopically or robotically). The oncologic result is the same but  endoscopic methods prevail because there is shorter hospitalization required and less post-operative pain. During radical prostatectomy, the whole prostate gland is to be removed along with the seminal vesicles (because cancer may expand to them). In some cases, it is necessary also to remove the lymph nodes (lymphadenectomy).

In order to be able to undergo such a serious surgical intervention, the patient must be in a good general physical condition. Most of the men will encounter erection difficulties after the surgery (erectile dysfunction), whereas all of them will have no ejaculation, since the basic semen-producing organs are removed. However, sexual desire is preserved  along with dry orgasm  (sexual climax without ejaculation). In some men with very good erections before surgery and localized cancer, the erection nerves are spared. 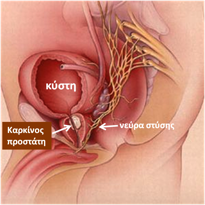 This special technique enables half of those men to progressively recover their erections within one to two years, provided that they follow a special post-operative program. In any case, most of them shall have to use the known erectile dysfunction treating drugs. Furthermore, some patients will have urine leakage (incontinence) especially during the first post-operative months. The Urologist must immediately refer those patients to a specialized physiotherapist for special continence exercises. These exercise routine sessions last from 3 to 6 months.

Radiotherapy aims at killing  cancer cells and  is divided  into external radiation and brachytherapy. Frequently, these two types of radiation are used in combination.

Brachytherapy has given results equivalent to those of radical prostatectomy, when performed in men with indication for that treatment, i.e. in the early stages of the disease. The method includes implantation of radioactive seed in the prostate gland. 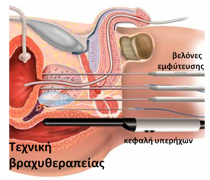 This is performed through the use of a transrectal ultrasonograph, which (as in biopsy), allows for visualization of the gland and correct directing of the implants at the right spots. After brachytherapy, some men will have micturition and erection problems.

The treatment options for advanced (non-localized prostate cancer) are hormonal therapy and chemotherapy.

The objective of hormonal therapy is to stop testosterone production or inhibit it before it reaches the prostate gland. Testosterone is the male hormone and  is produced in the testes through signals coming from the brain. The growth of both healthy and cancer cells in the prostate depends on the presence of testosterone. If there is no testosterone, the cancer cells die or grow very slowly.

There are two categories of drugs that act in a different way and are given either as a monotherapy or combination therapy. The first category, comes in an injectable form  (once- a-month and once-every-three-months) and inhibits the production of some substances in the brain. The role of these substances is to reach the testis, as bloodborne pathogens, and stimulate it in order to produce testosterone. The second category, in the form of a tablet (pill), prevents  testosterone from entering the cancer cell. Hormonal therapy is followed not only in cases of advanced prostate cancer but also in other cases. Thus, it may be used before chemotherapy, increasing its efficacy because it causes shrinkage of the tumor. Also, sometimes, it is used after surgery or radiotherapy, in order to slow down the growth of cancer cells that may have been spared.

Hormonal therapy has some side-effects which are usually well tolerated. Indicatively, the most common side-effects are erectile dysfunctions, hot-flashes, osteoporosis, hypoactive (low) sexual desire and body weight gain. When administered for several years, it increases the risk for myocardial infarction.

Chemotherapy is used when the cancer cells become resistant to hormonal therapy. The disease in that stage is advanced and there are painful metastases in the bones. Chemotherapy is not very effective when administered in an early stage. However, in patients with advanced disease it is useful for achieving both life extension and pain control in the bones. In some cases, it may be combined with external radiation of the intensively painful bone spots. The drugs that are used today are less toxic compared to the previous generation of drugs and patients tolerate them relatively well.