Intercourse pain disorders are sexual female dysfunctions that significantly aggravate the couples’ sexual life. Such disorders are usually Vaginismus and Dyspareunia. When the woman feels pain during sexual contact, it is very unlikely that she can experience sexual pleasure (Binik Y Principles and Practice of Sex Therapy ed Leiblum S, 4th ed., 2007).

Although two different entities, the above disorders are very hard to differentiate one from another. Vaginismus is the painful tightening of the vagina when vaginal penetration is attempted; this occurs due to involuntary contraction (spasm) of the muscles surrounding the entrance to the vagina. As a result, penetration is difficult or impossible to be achieved, despite the woman’s desire to engage in sexual contact.

Given that women hesitate to seek help, there are no sufficient statistical data available with regard to the incidence of the problem. However, it is estimated that about 2% of married couples face this problem and, as a result, live within the context of  a “white marriage” (marriage without sexual relations) (Gindin L & Resnicoff D. J Sex Marital Ther. 2002;28 Suppl 1:85-99). 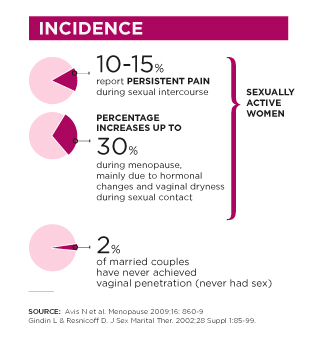 In Dyspareunia, the woman feels pain when vaginal penetration is attempted. It is estimated that Dyspareunia occurs in 10%-15% of sexually active women. This percentage increases and reaches 30% when women are in their menopause (Avis N. et al Menopause 2009;16:860-9) 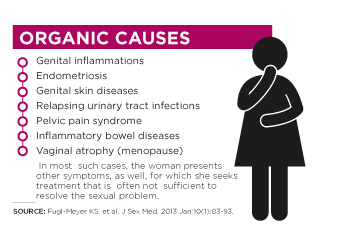 Psychological factors correlated with sexual intercourse pain include: depression, anxiety disorders, low self-esteem, embarrasment, sex phobia and problems in the couple's relationship ( van Lankveld J et al. J Sex Med. 2010 Jan; 7 (1):615-31. Psychological factors may be the only causes of sexual intercourse disorder or may exacerbate the consequences of the above mentioned organic symptoms. 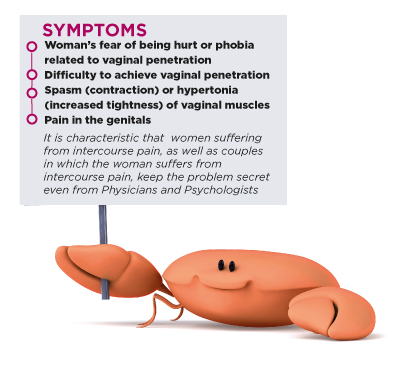 Intercourse pain disorders should be investigated from both a biological and psychological point of view. It is a fact that modern Sexual Medicine and Sexology have developed very effective therapeutic options for the treatment of the above problems. However, lack of awareness often inhibits seeking any sort of therapy.

The first step a woman should take is to get well informed about these problems by a Specialist Sexologist or by her Gynaecologist. The diagnosis will be set based on the woman’s sexual history; the clinical examination of her genitals will provide information on the potential presence of organic factors that may be aggravating the problem. However, provided the woman is often not prepared to receive clinical examination (due to her intense fear), it is usually suggested to initially start the therapy with a Specialist Sexologist and then later on -when she feels psychologically ready- to undergo physical examination. The sexual pain disorder therapy is carried out by the Sexologist and includes the following steps: Firstly, informing and educating the woman (and often her partner, as well) on the problem and the vicious circle of sex avoidance and fear of sexual intimacy that is triggered by pain. Secondly, the woman (usually with her partner’s participation) learns to perform certain exercises that will gradually help her increase the pain threshold (pain tolerance) upon genital pressure and vaginal penetration. These exercises are adapted to every woman’s individual needs, are gradually performed and do not cause pain. During therapy, the couple is usually recommended to abstain from sexual contact involving penetration. In addition, given that intimacy in the couple is reduced due to intercourse pain disorders, the therapy also includes techniques to help partners gradually and smoothly increase physical intimacy between each other. Furthermore, the therapy deals with special methods on how to control thoughts and feelings that exacerbate or preserve the problem. 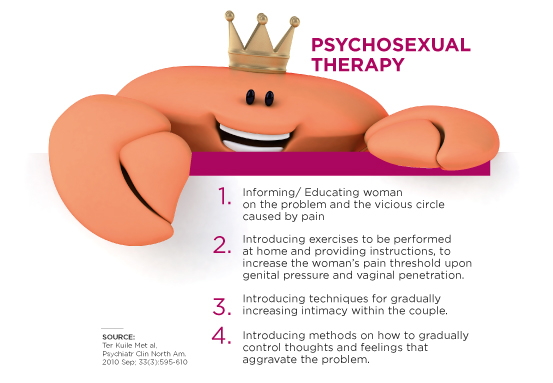 Modern Sexual Medicine and Sexology provide a great number of therapeutic options, whose success rate in most cases is particularly high. However, when couples have been keeping the problem secret for quite a long time and have got used to the absence of sexual contact, they find it really hard to talk about what is happening to them and hesitate to approach some expert to ask for help. This is probably the greatest obstacle on the way towards the treatment of the problem.

‹ Dangerous mistakes in condom use up Premature Ejaculation ›