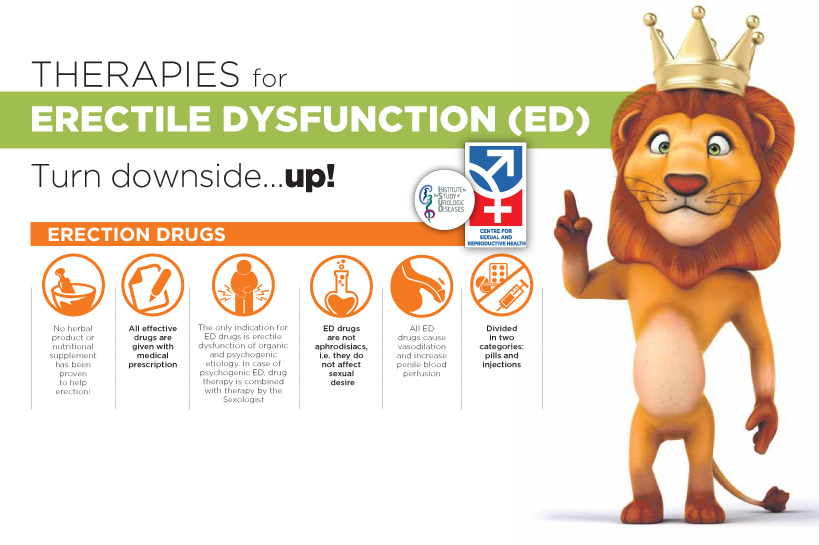 In 1982, French physician R. Virag announced that the papaverine intracavernous injection can cause penile erection by immediately increasing penile blood flow. This was actually the beginning of the pharmaceutical treatment for erectile dysfunction. The first drug in the market was the injectable prostagladine E1, but the real breakthrough took place in 1998 with sildenafil for oral administration. A few years later, in 2003, two more pharmaceutical agents came out with the same indication: tadalafil and vardenafil. These drugs have been proven to significantly help erectile dysfunction (ED), and are administered ONLY WITH MEDICAL PRESCRIPTION.

Besides the above pharmaceutical agents, there are also numerous herbal products and nutritional supplements that are advertised in the market for helping erection. However, there is no scientific evidence that these preparations are more effective than placebo. Needless to say that many of these products sold online (on the Internet) are particularly dangerous!

ED drugs are indicated for patients with organic erectile dysfunction. In case of psychogenic erectile dysfunction, drug therapy can help only if combined with therapy by the Sexologist. None of ED drugs has an aphrodisiac action, that is they do not increase sexual desire. They are all vasodilating agents; by improving penile blood perfusion, they achieve better penile rigidity and longer erectile duration. ED drugs are divided in two categories: oral tablets and penile injections. 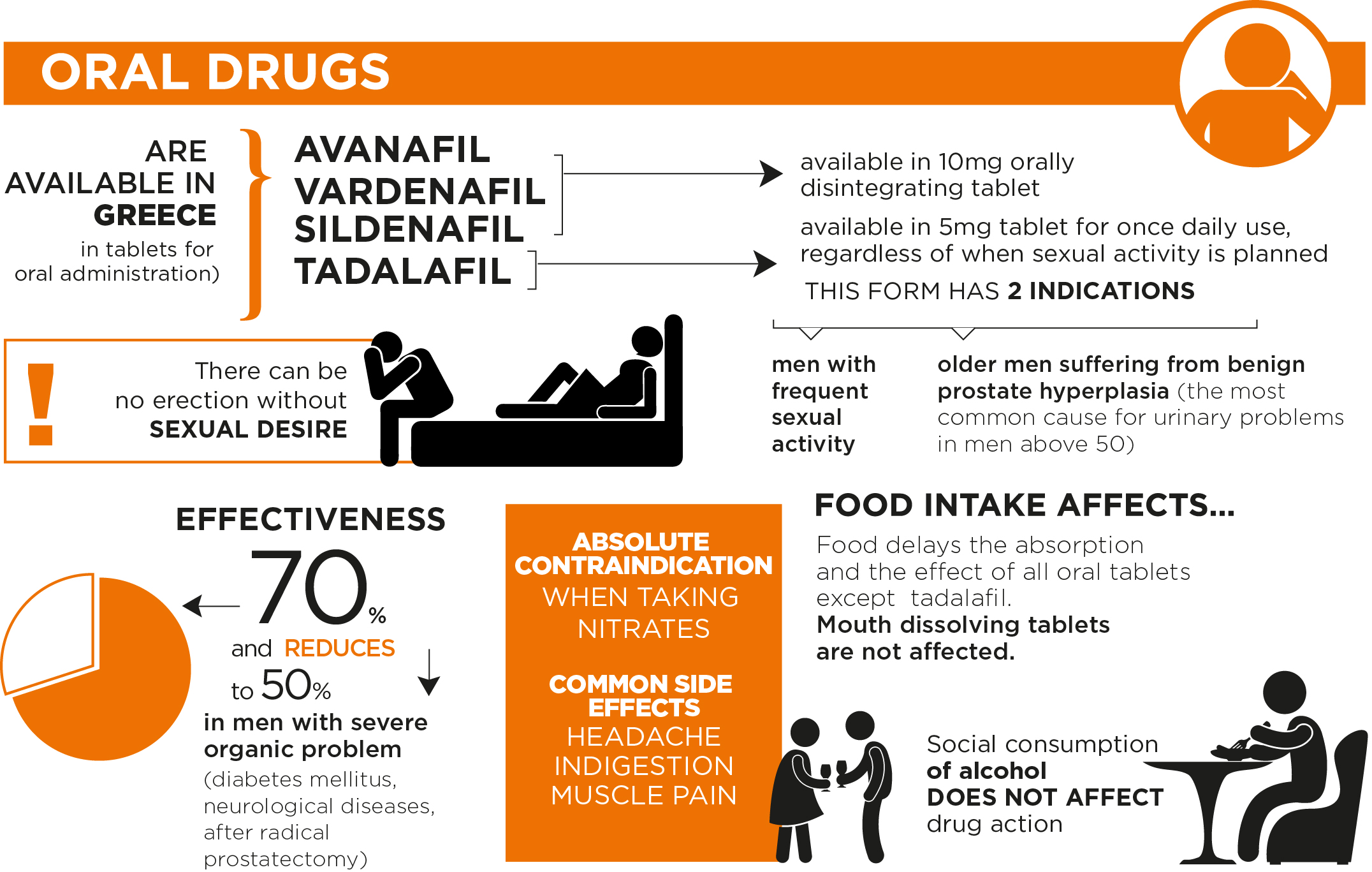 So far in Greece, four different oral drugs have been available for ED treatment: Avanafil, (Spedra ΤΜ),  vardenafil (LevitraΤΜ), sildenafil (ViagraΤΜ, and recently its generics Sildenafil ActavisΤΜ, Sildenafil PfizerΤΜ, Sildenafil SandozΤΜ) and tadalafil (CialisΤΜ).  All four molecules belong to the group of PDH-5  (phosphodiesterase-5) inhibitors and have the same action mechanism. Avanafil is available in 50, 100 and 200 mg oral tablets, Vardenafil is available in 10 and 20 mg oral tablets, as well as in 10mg orally disintegrating tablet (not affected by food intake).

All above preparation forms are indicated to be taken by the patient ‘on demand’, that is about one hour before sexual intercourse, whereas  Avanafil is recommended to be taken about 15-30 minutes before the sexual act. Tadalafil has an action of 36 hours, while the other three drugs have a duration of 6-12 hours. This does not mean that this is how long the erection will last, since these agents do not induce erection by themselves but only after sexual stimulation. So, what these agents actually achieve is allowing every patient to get involved in sexual activity whenever they wish to within the hours of their action. It should be pointed out that food intake affects negatively the action of Sildenafil and Vardenafil (in the form to be swallowed, but not in the oral disintegrating form), whereas Tadalafil is not at all affected by food intake. Avanafil is not affected by food intake either; however, its absorption is delayed when a high-fat meal  has preceded. It should also be noted that social use of alcohol does not affect the action of any of the above drugs.

Tadalafil is available in 5mg tablet for daily use, regardless whether sexual itnercourse will follow. This form is indicated for patients who have frequent sexual activity or suffer from benign prostate hyperplasia (BPH). Prostate hyperplasia is the most common disease causing urinary difficulty in men above 50 years old. Tadalafil has been proven to help not only erection but also urination in BPH men, when there are symptoms such as urinary frequency, urgency or dysuria (painful urination).

Their efficacy rate amounts to 70%, while this drops to 50% in patients who have severe concomitant diseases, such as diabetes mellitus, neurological diseases or after radical prostatectomy for prostate cancer.

These drugs are absolutely contra-indicated in patients who receive nitrates (drugs for coronary disease), since drug interaction may significantly reduce blood pressure. Most common side effects are headache, indigestion, muscle pain; more rare side effects are nasal congestion and eye disorders. Even if occurring, these side effects are mild and subside immediately after the regimen is discontinued. Avanafil, relatively,  has the most mild side effects. After an experience of 18 years, ED drugs have proven to be safe as long as they are used according to the therapist physician’s instructions. Besides, two of them (sildenafil and tadalafil) are already used on a chronic daily basis for the treatment of another severe disease, pulmonary hypertension. 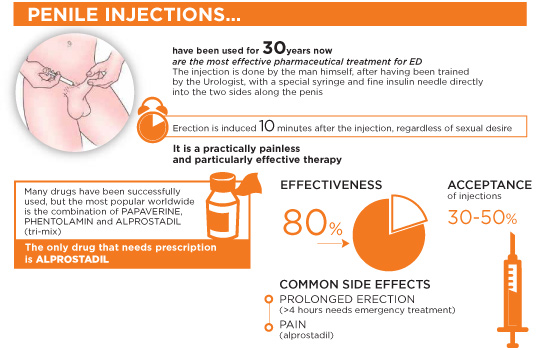 The injection is done with a special syringe and fine insulin needle directly into the two ‘cylinders’ (corpora cavernosa) along the penis. It is an injection of various vasodilating agents that improve penile blood perfusion (papaverine, phentolamine and alprostadil). The injection is done by the patient himself, after he has been trained by the Urologist and after having together decided on the proper individualized dosage. The drug acts topically, and erection is achieved 10-15 minutes following the injection, irrespective whether there is sexual desire. The overall process is practically painless and complications are rare. The most severe complication that might occur is priapism. Priapism is a prolonged painful erection that does not subside even after 3-4 hours. It should be pointed out that what we want to achieve with the injection is erection of 30 minutes to 1 hour at the most. Therefore, the patient should be well informed so that, in case priapism occurs, he immediately informs his physician to be treated as an emergency case. It should be known that erection prolongation of more than 6-8 hours may cause penile impairment and permanent severe erectile dysfunction (fibrosis within the corpora cavernosa). Penile injections have a success rate over 80%. It has been found that 30-50% of patients who select this form of therapy will continue using it after the first 3 months. Among the drugs, the most commonly used are papaverin, phentolamine and alprostadil. They may be used either as monotherapy or in combination. The most popular combination includes these three agents and is known as “tri-mix”. Although used worldwide as the most effective ED treatment, “tri-mix” is not available in the market. Out of its 3 ingredient drugs, only alprostadil is available in pharmacies, as it is the only agent prescribed and officially sold  (commercial brand: CaverjectΤΜ) ONLY WITH MEDICAL PRESCRIPTION. Alprostadil is available in a 20μg vial. The dose is individualized for each patient, with a normal dose of 5-20μg and the maximum daily dose amounting to 40μg. The injection should be done about 10 minutes before sexual intercourse and drug action ranges between 1 to 2 hours. 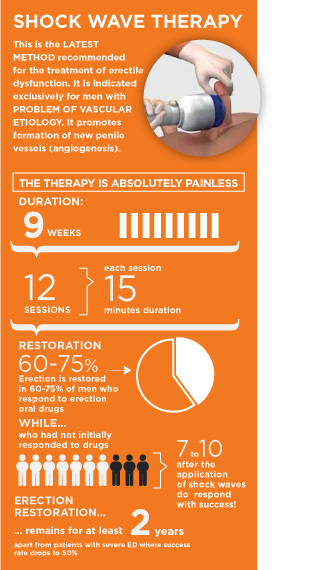 Extracorporeal Shock Wave Therapy (ESWT) is a painless and effective therapeutic method to treat erectile dysfunction of exclusively vascular etiology. ESWT was developed during the last 10 years. The application of soundwave technology on the penile cavernous bodies promotes the formation of new penile vessels (neoangiogenesis), increases blood flow, improves penile blood perfusion and ultimately results in achieving better quality erections. The therapy lasts 6-9 weeks. During the 2-3 first weeks, 2 or 3 therapeutic sessions take place weekly; then  therapy is interrupted for a period of  2-3 weeks; and the same scheme is repeated for rest of the weeks. In total, there are 12 sessions, each session lasting 15-20 min. The whole process is absolutely painless and there are no complications.

As for efficacy, studies have shown that 60-70% of patients who respond to oral ED drugs will not need ED drugs any more after the application of sound waves and will have satisfactory sexual intercourse. With regard to patients who do not respond to ED drugs, 70% of them will respond to the drugs after the application of sound waves.  It seems that these results are maintained on the long term, as long as the patient controls vascular risk factors (e.g. give up smoking, good control of diabetes mellitus/ hyperlipidaemia/ hypertension). In patients with severe erectile dysfunction, the success rate of the method drops to 50% and therapeutic efficacy reduces over time.

Penile prosthesis is a device placed inside the penis to help the male achieve erection for a successful sexual intercourse. It is a therapeutic option for patients who have tried all other therapies (drugs, penile injections) without any success. There are two types of penile prostheses: malleable (semi-rigid) and inflatable. Malleable, or semi-rigid, prostheses are composed of two cylinders that are inserted within the two cavernous bodies, in order to achieve satisfactory penile erections. In inflatable prostheses, the cylinders are connected with a pump system and a reservoir. Whenever the patient wants to achieve an erection, he presses the pump and the normal saline inside the reservoir ‘inflates’ the cylinders located inside the cavernous bodies. When intercourse is completed, the man presses again the pump and the fluid flows back to the reservoir and erection subsides. The advantage of penile prostheses is that they have an excellent aesthetic result; however, they have a much higher cost compared to non-inflatable prostheses. Ejaculation and orgasm are not affected at all after surgery. The surgical procedure for placing a penile prosthesis last about 1 hour. The patient can resume to his daily activities a few days after surgery and can start sexual activity after one month. When being well-informed, both patients and their partners present a satisfaction rate over 90%. Complications are rare, with most severe complication the infection or mechanical failure of the prosthesis; in such a case, the prosthesis has to be immediately removed.